Keep continuing around the circle until it starts over at C major again, back at the top of the circle. You will notice that there are three keys in the circle that have two different names. B is the same as Cb. F# is the same as Gb and C# is the same as Db. These are known as enharmonic keys (they sound the same, but are notated differently). In a practical situation you would use B instead of Cb as it is easier to think of 5 sharps rather than 7 flats. Also you would use Db instead of C#, because it is better to think of 5 flats instead of 7 sharps. Since F# and Gb have an equal number of sharps and flats, either can be used. C# and Cb are considered more "theoretical" keys than actual usable keys, so you will rarely see them. 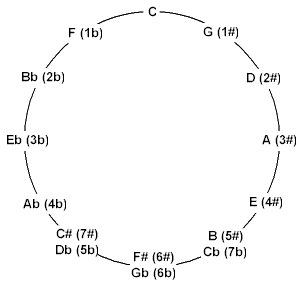 Here are all the key signatures with their respective accidentals: 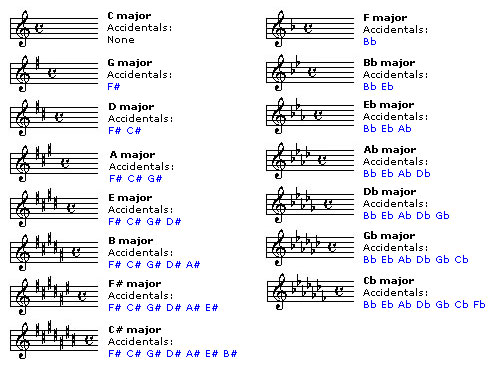 It is a good idea to memorize these keys and to know exactly what accidentals each contains. There is a really easy little rhyme to help you remember this. First, remember that C major has no sharps or flats. Easy. Then:

For sharp keys:
Father Charles Goes Down And Ends Battle

For flat keys:
Battle Ends And Down Goes Charles Father

It might take a while to really know these keys inside out so don't drive yourself nuts if this doesn't sink in for a while. Know the theory behind the keys as I have explained above and the more you actually play in a key, the more each will really hit home with you and become comfortable.

So the relative minor of C major is therefore A minor. Makes sense? All the key chords pertaining to the key of A minor are (for our present purposes) the same as C major except that in order for us to really establish our new key center of A minor, it is necessary for us to include the chord of E7 because if we were to play a perfect cadence in A minor, we would need to go v - i (chord 5 going to chord 1), just like we would in a major key. Our v chord is always dominant remember? or dominant 7th. (in the key of C major, our v dominant chord is G7). So in the key of A minor, our v dominant chord would be E7 (not E minor as the key of C major would suggest).

In any major key, simply count up six steps to find out what the relative minor key is:


Back to lessons index

The Long Awaited Play What You Hear Volume Two Is Now Here!

It has been many years since the first edition of Play What You Hear (originally released in 2000). Now volume two is here with new ideas and concepts, complete with audio, video, traditional notation and TAB throughout. High resolution pdf available for printing the entire program. For intermediate and advanced players.